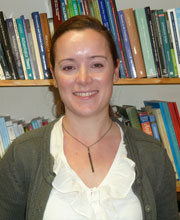 I have been a Lecturer in Archaeology in the School of History and Archaeology since September 2010. My research focusses on the settlement and material culture practices of the later Bronze Age and Iron Age in Britain, and I have specific interests in the hillforts and settlements of north-west Wales and the midden sites and material culture practices of southern Britain. I teach a range of undergraduate and postgraduate modules on British prehistory and archaeological theory and practice.

I currently teach a range of modules which focus on the archaeology of prehistoric Britain, as well as archaeological principles, techniques and theory.

I am willing to supervise PhD topics that have a focus on the later prehistoric period of Wales and southern Britain, specifically relating to settlement, material culture and depositional practices of the later Bronze Age and earlier Iron Age.

My current PhD student, Nebu George, is exploring the use of space within houses dating to different periods of British prehistory through phosphate and multi-element analysis of the floors.

I am currently in the initial stages of writing a large AHRC grant which seeks support for a multi-disciplinary and collaborative project that will carry out much needed analysis of the Late Bronze Age and Early Iron Age midden sites of southern England. This project will complete and substantially take forward my recent work on the midden sites (including published work and my unpublished PhD), and it will continue and expand the chronological work that has recently been published for one of the case study sites in Wiltshire (East Chisenbury; see below). The proposed work will bring previously isolated and unquantified data-sets together, and will expand the range of scientific and analytical techniques applied, helping to illuminate some of the processes of change, communication and expression in this period.

The Meillionydd Project and understanding the chronologies of hillforts in north-west Wales
With Professor Raimund Karl.

This research concerns the investigation of a hilltop enclosure at Meillionydd in Rhiw, Gwynedd. The site forms one of ten ‘double ringwork’ enclosures on the Llŷn peninsula. Despite representing a distinct regional tradition, the development of these enclosures is not well understood. The results of our first five seasons of excavations (2010–2014), which examined the eastern side of the site and the entrance-way, is currently undergoing post-excavation and it is being written up into a monograph. The excavation results and GPR survey have revealed a long and complex sequence of occupation, beginning with a timber settlement of roundhouses and a palisade enclosure, and culminating with a double ringwork of stone and earth banks with internal stone roundhouses. Current radiocarbon dates span c. 750 – 200 cal. BC. An ORADS NERC grant of £7200 for 21 radiocarbon dates from the eastern area excavations was awarded in 2017. This data is due to be combined in a Bayesian model with Derek Hamilton in order to better understand the sequence of occupation which partly falls on the earlier Iron Age radiocarbon plateau.

The results from our excavations are transforming current understandings of the nature of the hillfort record in northwest Wales and how it ties in more generally with the hillfort sequence in the rest of Britain. To date, only a handful of hillforts in Wales have been the focus for modern excavations or radiocarbon dating, although none have been the focus of a large dating project like Meillionydd.

This radiocarbon dating project aimed to provide a refined chronology for the Late Bronze Age – Early Iron Age midden deposits at East Chisenbury, Wiltshire. Bayesian analysis of the radiobcarbon dates not only produced much finer grained chronologies for the sequences of material accumulationin (laid down during the earlier Iron Age radiocarbon plateau), but it has also enabled a reassessment of the validity of current interpretations surrounding the chronology of post Deverel-Rimbury decorated wares. This has implications for understanding of the nature of this transitional period in Wessex.

Whitchurch is a large later prehistoric midden and occupation complex located in the Feldon area of Warwickshire. An initial campaign of excavation and field survey has been undertaken using a variety of funding sources. The aims were to define the extent and characterise the nature of the site – this was achieved via geophysical surveys (with Tim Young, GeoArch), metal detector surveys (with Archie Gillespie) and the excavation of eight trial trenches (with Cardiff University undergraduate students). The geophysical surveys defined a Late Bronze Age midden, 300m by 175m in extent, and confirmed the presence of several ditched enclosures, linear earthworks and post-built roundhouses. The excavations between 2006 and 2009 confirmed the nature and size of the varying midden accumulations (between 0.10m – 0.75m thick) and assessed their relationship with a series of enclosures and linear boundaries, many of which proved to be later Iron Age in date. The project has been initially written up into a book, entitled, The Whitchurch Excavations 2006–9: an interim report (published 2010), but further post-excavation analysis of the large material culture assemblage is still required.