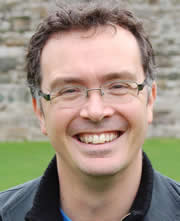 I joined the School of History, Welsh History and Archaeology at Bangor in September 2007. I was awarded my Ph.D. by the University of St Andrews in 1998, worked for a time as a solicitor in the City of London, but returned to academia in October 2003. From then until the summer of 2006 I was employed in the History Faculty at Oxford University as a post-doctoral research assistant on a project to edit the charters and writs of Henry I (1100–1135). I am a fellow of the Royal Historical Society, a member of the council of the Pipe Roll Society, and a trustee of the Allen Brown Memorial Trust (which organizes the annual Battle Conference on Anglo-Norman Studies).

My research focuses on the rule and government of England and, principally, Normandy from the tenth to the twelfth centuries. I published a monograph on Norman rule in Normandy between 911 and 1144 in 2017, and am currently beginning work on the subsequent period of Angevin rule in the duchy, looking initially at the reigns of Geoffrey V and Henry II (1144–1189).

That research goes hand in hand with work on the rule and government of the Norman and Angevin kings in England, with a focus here on both the charters and writs that the various kings issued, as well as on the pipe rolls—the records of the annual audit of the king’s revenues.

In addition, I am developing an interest in the life and reign of Robert the Pious, king of the French between 996 and 1030.