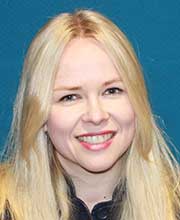 Position: Director of Research and Impact

Position: Director of Research and Impact

Enlli Thomas is Associate Pro-Vice Chancellor for Welsh at Bangor University, and Professor of Education Research. She has been a Visiting Professor at Umeå University, Sweden since 2018, and is the 2019 recipient of the prestigious Learned Society of Wales Hugh Owen Medal for outstanding educational research in Wales.

Her main research interests and expertise span psycholinguistic approaches to the study of bilingual language acquisition, including children’s acquisition of complex structures under conditions of minimal language input, bilingual assessment (psychometric), and education approaches to language transmission, acquisition and use. She has conducted research and published widely in many areas of language study. These span papers on aspects of bilingual acquisition, including impact factors influencing successful L1-L2 acquisition; bilingual transfer; bilingual assessment; bilingual literacy; Executive Function and bilingualism; socio-economic status and language abilities; and factors influencing language use. She gives regular invited lectures to practitioners and child-care workers both in the education and in the mental health sector on topics relating to language development and bilingualism, and had made regular appearances on tv and radio as an expert informant. She has also been invited as a Keynote at numerous international conferences.  Her work has also generated substantial national impact - most notably in the development of statutory Welsh language initiatives that are operational in schools across Wales.

She has been involved as a co-author on a number of successful large-scale research grants, looking at language transmission practices in the home (Welsh Language Board), cognitive effects of bilingualism across the lifespan (ESRC), developing Welsh language assessment tools (Welsh Assembly Government), neuropsychological assessment of bilingual Welsh-English speakers (North Wales Research Committee & West Wales NHS Trust Research and Development Grants Awarding Committee) and bilingualism and dementia/Parkinson's (ESRC). More recently, she was co-I on the CorCenCC National Welsh Corpus project (£1.8 Million - ESRC/AHRC) where she led on the development of a pedagogical toolkit for use in schools. She has also led on various Welsh Government funded projects related to the Covid-19 pandemic.

She was a core member of the Executive of the ESRC Centre for Research on Education in Theory and Practice 2007-2012.

In 2014 she became Head of School for the School of Education and Human Development, before returning to focus on her core research in 2018.

ESRC: Cognitive effects of bilingualism across the lifespan (Gathercole & Thomas: £720,000)