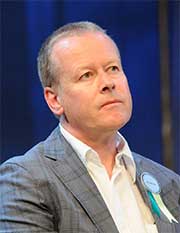 Professor Gerwyn Wiliams was brought up in Cheshire, Anglesey, Montgomeryshire and Cardiganshire.  He attended Llangefni Secondary School and Welshpool High School before studying for a degree in Welsh at University of Wales, Aberystwyth.  He went on to gain a doctorate under the supervision of Professor John Rowlands.  Following a brief stint as Deputy Editor of the Welsh arts and current affairs magazine, Barn, he was appointed to a lectureship in the Department of Welsh at Bangor University in 1989.   He served as Deputy Director of the School for Welsh Medium Studies (1996-98), Dean of the Faculty of Arts and Social Sciences (2000-02) and Deputy Head of the College of Arts and Humanities (2005-06). He was awarded a Personal Chair in November 2005.

His research into Welsh literature relating to the First World War is contained within two major publications: Y Rhwyg (‘The Rupture’) (1993) which considers the response of Welsh poets to the conflict and Tir Neb (‘No-man’s Land’) (1996) which considers prose accounts of the war.  Tir Neb was named Book of the Year by the Arts Council of Wales in 1997 and was awarded the Ellis Griffith Memorial Prize and the Mrs L.W. Davies Award by the University of Wales Board of Celtic Studies in 1998.    He has developed his research interest in the relationship between literature and war into an academic specialism: in 2005 he published Tir Newydd (‘New Territory’), a critical study of Welsh literature and the Second World War, and in 2006 he published an essay entitled ‘Cofio Rhyfel Anghofiedig’ (‘Commemorating a Forgotten War’) which sought to analyse and contextualise the responses to the 1982 Falklands/Malvinas conflict.

He made a name for himself as a poet at an early age: Tynnu Gwaed (‘Drawing blood’) (1983) and Colli Cyswllt (‘Losing contact’) (1984) were both awarded the Urdd National Eisteddfod Literary Medal and he has since published a further three collections of poems namely Rhwng y Cŵn a’r Brain (‘Going to rack and ruin’) 1988), Cydio’n Dynn (‘Holding on tight’) (1997) a Tafarn Tawelwch (‘Tavern of Tranquillity’) (2003).  In the series of poems ‘Dolenni’ (‘Bonds’) for which he was awarded the National Eisteddfod Crown in 1994, he creatively exploits his interest in literature and war in a number of poems addressing the Vietnam War, the Gulf War, and the conflict in Bosnia and Serbia. In 2012 his volume Rhwng Gwibdaith a Coldplay (2011)was shortlisted for the Welsh Book of the Year award.

He was invited to present the 2007 G.J Williams Memorial Lecture by the School of Welsh at Cardiff University.  His study of the war poems written by Alun Llywelyn-Williams was published in 2007 in The Oxford Handbook of British and Irish War Poetry edited by Professor Tim Kendall. In November 2006, he organised a conference entitled Mwy na Rhywbeth i’w Wneud?  Barddoni mewn Canrif Newydd (‘More than just something to do?  Writing poetry in a new century’): among those taking part were Dr Gwyneth Lewis, first National Poet of Wales, and Emeritus Professor of Welsh, Gwyn Thomas, then National Poet of Wales. In 2013 he was invited to give the inaugural Islwyn Ffowc Elis Memorial Lecture at the first 'Gŵyl Golwg' in Lampeter.